Statement by the Party of Labour of Iran (Toufan):

On Monday January 23, 2012, the foreign ministers of the imperialist European Union countries decided in Brussels to extend the economic sanctions on Iran by putting sanctions on the Central Bank of Iran and by freezing the assets of the Iranian people in Europe. In order to inflict a heavy damage on the economy of Iran, they decided to place an embargo on the export of Iranian oil to Europe.

To impose economic blockades on and to cause hunger in Iran are acts that are internationally illegal and are crimes against humanity. Imperialists want to impose their sinister, plundering, and domineering intentions on Iran and on their “axis of evils” by creating another Iraq and a second Gaza Strip. By punishing Iran, the imperialist countries want to teach a lesson to Non-Allied countries and to those who do not submit to their dictates.

While the foreign minister of Russia, Sergei Lawrow, stated that the “unilateral actions are useless”, he added that there was no reason to make any decision in addition to collective decision by the UN Security Council. The deputy foreign minister of the racist government of Israel, Danny Ajalon, claimed in a press interview that “These sanctions have reduced the threat of war”. Coming out of the meeting that made warmongering and threatening decisions on Iran, Ms. Catherine Ashton who is in charge of the EU international relations and the foreign minister of Sweden Mr. Carl Bidlt claimed that the basis of their work was to appeal to diplomacy and negotiation!

The imperialist powers clearly lie when they claim that they recognize the legal and indisputable right of Iran to enrich uranium. The fact is that they have monopoly in producing nuclear energy. The recognition of Iran’s right to produce nuclear energy is to break the imperialist monopoly. In a deceptive psychological war, the major powers warn the world about Iran’s nuclear bomb, but they have not disclosed any document to show the existence of this bomb. German foreign minister Guido Weserwelle shamelessly said that “We cannot accept Iran developing nuclear weapons” and that “This is not a security problem for the region only but it will disrupt the world security”. Wow! The non-existent Iranian nuclear bomb disrupts the security of the entire globe but many hundred known or secret warheads in the hands of American, British, French, and Israeli warmongers are nor dangerous for the world security! Apparently, there are good and bad atomic bombs! The arguments given by the representatives of the imperialist powers are fierce, threatening, and sickening.

The history of economic sanctions shows that the ordinary people of the countries on which the sanctions were imposed suffered the most by the sanctions. In Iran, the inflation is rapidly rising, shortage of medicine and medical equipment is already felt, and particularly patients with heart problems are under attack because the companies making the equipments are under the US sanctions and cannot export their products to Iran. This is not a concern for the imperialist powers. It is not important to US President Obama and his Iranian allies if millions of people are slaughtered in the war. Also, the sanctions on Iran give an excuse to the authority of the Islamic Republic to increase the suppression of the anti-imperialist and democratic forces in Iran.

The imperialist powers think that if their sanctions cause widespread hunger in Iran, then the people will rise up and install a Western puppet regime. This is a miscalculation because the history of the Iran shows that Iranian people have always rejected submission to any forces allied to foreign imperialist powers. The Iranian masses have no feeling except disgust and hate towards sellouts, spies, and those who carry out terrorist operations in Iran.

The fact is that the imperialists’ actions against Iran are not for eliminating the Iranian nuclear bomb. Such a bomb does exist. Iran holds a key geo-political position in the Middle East region and is the center of entangled world contradictions. To control Iran is to control an entire strategic region with enormous energy resources that the US has desired to plunder for decades. The Strait of Hormuz is a valve for export of oil to the four corners of the globe. The US imperialists wish to have control over this oil valve. The presence of the US forces in the region is a danger for the world security and is a threat particularly to the security of the Middle East. The propaganda about Iranian atomic bomb, the bomb that does not exist, is justification for aggression on Iran and for domination of the region, and Islamic Republic’s capitulation to imperialists’ demands will not change the imperialists’ nature of following their domineering goals.

The regime of the Islamic Republic of Iran is a reactionary and Mafia-style capitalist regime. The regime of Iran has lost all its legitimacy, and the overwhelming majority of the Iranian masses are disgusted by the regime. The task of overthrowing this criminal regime is on the shoulders of the Iranian masses. The regime change by the imperialist invading forces will be for the purpose of colonizing the country and looting the resources of the nation. The imperialist powers have never supported and will never support the freedom-loving and democratic forces anywhere in the world. Their talks about freedom and human rights are nothing but smokescreens for their criminal actions, and Iraq, Libya, Yugoslavia, Afghanistan … are testimonies to this. Hypocrisy is written on their foreheads.

The Party of Labour of Iran (Toufan) 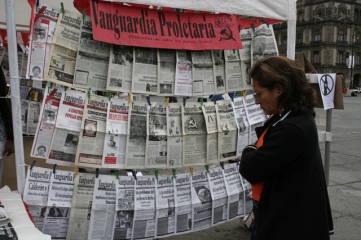 The following is a statement from the Communist Party of Mexico (Marxist–Leninist), analysing the planned US military “intervention” in Iran.

These days it meets the security council of the United Nations Organization (UNO), consists of China, the United States, Russia, France, Britain plus Germany, who is a permanent member of this organization. Among the topics to be discussed is that of Iran, who asked to stop uranium enrichment, arguing that this is used to produce nuclear weapons. END_OF_DOCUMENT_TOKEN_TO_BE_REPLACED