The budget of 2020, like its predecessors was high on rhetoric but devoid of any substance. The governmental denial of the economic crisis was clearly discernible, with the Finance Minister, Nirmala Sitaraman looking out of sync with the reality. It was a delusional budget, without any vision or mission!

An impending economic catastrophe is approaching India. The economy is in disarray and society at large is in turmoil. Economy is disorganised and the disorganisation is progressing at a frenzied phase. All the three major sectors of the economy i.e Agriculture & allied activity, Manufacturing and service are all in a quagmire, with the Government and the Capitalists all playing their part in deliberately and unremittingly wrecking it. The country is entering a long period of economic and social ruination.

The budget has neither shown any inclination nor has accepted the crisis, what it did was to give more sops to the corporates while taking steps to further squeeze the people of their misly income.

The finance minster in her speech laden with several quotes from various poets tried to portray the government as one committed to the welfare of all and which has an agenda of taking the country to greater heights of glory and happiness; something that all right wing governments from Hitler to current dispensation have been proclaiming night and day.

The the budget would be analysed in details by the economists and other experts, but a cursory look at the speech and the details enumerated by the minister is enough for us to understand whose welfare and glory was being referred to.

The minister repeatedly emphasised about the greatness of the so-called “wealth-creators” a new euphemism for the bourgeoisie who after bleeding the economy dry, are crying for subsidies and financial aids. The proponents of the ‘invisible hands’ are looking towards the government to provide them the ‘visible’ hands.

All the governments have been playing the role of facilitators for these wealth creators in their pursuit of maximising profits and squeezing the working class. This government differs from all the previous ones in that it is more brazen when it comes to aiding and abating the capitalists.

More Sops to the Corporates

After giving the corporate sector a massive package in September last year, the Modi government, in this budget also made sure that they were the receiver of another massive dole.

The budget announced doing away with dividend distribution tax (DDT) and extending the restructuring window for MSMEs by a year. The removal of DDT itself turns out to be of Rs 25,000 crore. The logic behind this being, it would spurt the growth and lead to creation of more jobs. 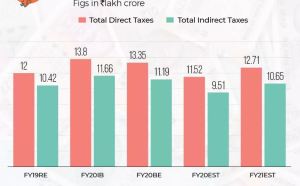 But as we saw, such doles have neither led to growth nor in creation of jobs. In reality the capitalists utilise such packages to realign their accounts and divide it as profits/ dividends amongst themselves. They would never utilise the funds for increasing the production as there is no demand for the products, nor would they invest them in expanding their capacity, when their existing capacity is not being utilised.

So, in reality what happens? The funds are distributed among the shareholders using various accounting means. Whose money was it that were handed over to these corporate bosses? It was the money kept in financial institutions like LIC, Banks etc. They were the money of this country’s working class, who saves it after killing so many of their aspirations. The government then lends it to the capitalists to squander it at their will.

The Don Quixotic approach that the government has taken to boost economic growth has not borne fruit in the past nor would it bear in the future.

There has been no steps announced that one could see as generating more demands, instead the old recipe of bailing the corporates has continued.

The crisis of banking sector is increasing day by day. The saving rates that was about 36 percent a decade ago has drastically reduced to less than 18 percent. People are wary of putting their cash in banks, due to their perceived risk of failure. The failure of PMC and other cooperative banks and bankruptcy of other NBFCs like IL&FS has further exacerbated this crisis.

The declaration of increasing the security of amount kept in bank to 5 lakhs rupees from the current 1 Lakh is not something to rejoice, but should be seen as an acknowledgment by the government that the crisis of Indian banks are much deeper than what is portrayed
Revenue via asset sale

Where does the government intends to generate revenue from. With GST collection at historic low and fiscal deficit increasing, it has set its eye on selling the strategic assets i.e. the profit making enterprises.

With this the government has declared that it would sell its stakes in the IDBI bank as well as sell some of its stake in LIC via IPO. LIC has been for long considered as a cushion that had saved the meltdowns, but off late the government had forced it to buy shares of distressed companies leading its coffer thin.

With selling of LIC the government aims to generate amount to cover its fiscal deficit, but this move at the same time is the first step towards its privatisation. Something that the big capitals have being eyeing for long!

Lollipops to the farmers 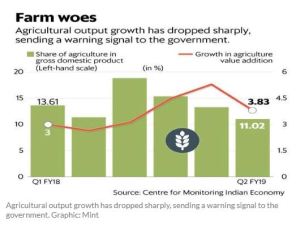 The agrarian crisis shows no signs of abetting. The farmers are committing suicide and the indifference shown by the Modi government seems to have now been institutionalised in its lackadaisical attitude in mitigating the problem. The apathy has gone to such an extent that the government has stopped publishing the data on farmer’s suicide since 2016. A book by P C Bodh former IES says; “70-75,000 farmers may commit suicide during 2016-2020” (Farmers’ Suicides in India: A Policy Malignancy’).

The budget has several schemes announced for the agricultural sector, but they like the character Don Quixote are all just meant for bureaucratic records.

The FM has declared the committment of the government on dubling the farmers income by 2022, yet it failed to declare that their current income in past years have actually decline by 1.38 percent since 2014.

In such scenario what has the government proposed?

Instead of handling the crisis the budget has proposed to set up warehouses in PPP model. Such warehouses would be build and operated by private party who would extort a massive fee from the farmers to keep their produce.

What actually the government has done is to declare that henceforth the agriculture sector would be controlled by the big capital. It has declared a death-knell to the small and marginal farmers. Something that confirms to the capitalistic development. The proletarisation and pauperisation of these farmers has been encoded.

While declaring the start of rail and airplane it has further reduced the fertiliser subsidy.

The other flagship scheme PM Crop Insurance Scheme, that was highlighted by the FM, has in reality only helped the insurance company. Out of total Rs 25,000 crore from premium collected from the farmers a paltry sum of 153 crore were paid as compensation. Thus, one can see who has benefited from this scheme!

Clueless on how to create jobs!

Amidst all the phrases and jargons there was nothing concrete mentioned on how the government plans to create new job. The abysmal job scenario has been making rounds, but like all other sector the apathy is visible here also.

What has the budget said about it. The FM declared that to create more jobs it shall work on:

* Special bridge courses to be designed by the Ministries of Health, and Skill Development: To fulfill the demand for teachers, nurses, para-medical staff and care-givers abroad.

* Urban local bodies to provide internships for young engineers for a period of up to one year.

This is called a panacea of all ills and now one can understand where the core focus area of this government is.

It is on creation of low skilled non specialized jobs. Not that these jobs are not important but when government only focuses on such skills one can understand why they abhor higher education institutions.

Even in this field, the allocation for MNREGA, has been actually reduced. The scheme has been allocated Rs 61,500 crore — higher than last year’s Budget estimate, but lower than the revised estimate of Rs 71,000 crore.

So we see how the government is trying to tackle the economic crisis.

The health sector has been allocated a sum of Rs 69,000 crore marginally up from Rs 62,500 crore, allocated in last budget. Of this, Rs 6,400 crore has been allocated to Pradhan Mantri Jan Arogya Yojana (PMJAY), also known as Ayushman Bharat, the same as in 2019-20.

Ayushman Bharat again is designed to help the insurance companies and the private hospitals. In fact experts have challenged the entire scheme which is an eye-wash to divert the population to private hospitals, and pay for their exorbitant price.

How many poor have availed this scheme is itself a subject of immense controversy.

Any one that has benefited from this are the insurance companies and the private hospitals that are known for their malpractices.

The budget has also mentioned about setting up of medical colleges in PPP model; how would the poor would get into such colleges who would be charging obnoxious amount is for anyone to guess.

No Scheme for the workers

Overall this budget has been a complete eyewash for the masses.

As with the economic survey the budget speech was one laden with fables and stories, which at the end had nothing for the toiling masses of the country!

The coming days would see the economic crisis turning into an economic catastrophe, with the economy going further down.

The bourgeoisie “experts” even till date are trying their best to conceal the approaching calamity, ably aided by the ‘Modi-fied’ media, that has shed even an iota of neutrality found in the other parts of the world.

That is why, economic affairs do not come to the fore of any political discussion and the common man remains clueless, till the boat has been rocked.

The country was thrown wide open, to few chosen capitalists to reap immense benefits and squander the country’s wealth.

Systematic, curtailment and subjugation of the so-called pillars of democratic institutions were undertaken. Subservience became the sole criteria of survival; the cronies and the serviles flourished, while the masses floundered.

The government can use the power of propaganda to cover its incompetence for sometime, but it cannot stop the impact.

This is where India is today, and with this budget it has further hastened the impending economic crisis!

2 thoughts on “Budget 2020: Sops to Corporates and Rhetoric for the People”