Of late there has been a distinct unease among the bourgeoisie academicians’ world over on the rise of what they call as “crony” capitalism. Somehow there is an illusion among them of capitalism that has been derailed of its moral, ethics and the great ideal of freedom & free trade, usurped by what has increasingly been called as crony capitalism. Bourgeoisie academician from right to Left have been lamenting about the loss that capitalism has suffered and the crisis the capitalism is suffering and as a solution they say if the “real” capitalism is restored all the ills facing the planet would magically be solved. It is just a matter of bringing back real capitalism and get rid of cronyism or corporatism. 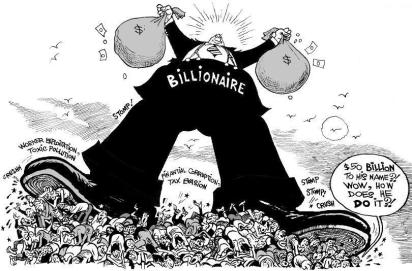 In our country, all parliamentary party has used the bogey of cronyism. From AAP to the revisionist Left (CPI and CPI-M) have been mulling on the rise of cronyism and the hindrance it has caused to the development of the country. Even the architect of neo-liberal reforms and former PM who has suddenly become a darling of liberal –left Manmohan Singh had said that; “Crony capitalism is a danger that we must guard against”, though while in power his regime was also charged with abetting and supporting crony capitalism.

Today when there has been a perceptible policy changes in support of few chosen industrial groups by the current government, once again these apologists of neo-liberalism have been at pains to “denounce” the rise of cronyism. The grave concern showed by CPI (M) is what concerns us and also makes us laugh at the condition that this party of crass revisionist has come to. But before we comment, let’s read their concern. In the press statement titled “Alarming Levels of Crony Capitalism” released on 21st February 2018, the party’s Polit Bureau mentions,

“The Polit Bureau of the Communist Party of India (Marxist) expresses its grave concern at the alarming rise of levels of crony capitalism under this BJP government and Prime Minister Modi. One after another chosen corporates’ who have defrauded people’s money and manipulated the system are allowed to leave the country before facing the law of the land. The latest in this is the case of Nirav Modi.”

“the Prime Minister must furnish information on who are the industrialists whose NPAs have been waived to the tune of Rs. two lakh crore, according to the statement made in parliament. The Prime Minister must also provide a list of industrialists accompanying him on his foreign visits at the expense of the State exchequer. Concealing of these names shows the levels to which crony capitalism benefitting chosen individuals close to the ruling party is being practised. This is completely reprehensible and cannot be accepted.”

“all its Party units to organise protest actions on the above demands across the country.”

We leave this to the mandarins of AKG Bhavan.

But how does the Marxist revolutionaries who have not sold their soul to the spirit of ‘free market’ understand this phenomenon. Is it something different from capitalism? Is it a genetic mutant that has turned itself against its creator? We once again would have to turn to the analytical rigour of Marxism.

How is crony capitalism defined? According to the website Against Crony Capitalism (ac2news.com),

“Crony capitalism and genuine capitalism, if not opposites, are fundamentally opposed. Unfortunately the broader public, to date, is largely unaware of this. Crony capitalism is the marriage of the state and private special interests. Some people have called it corporatism, mercantilism, fascism, or even Communism.”

Well forget about them stating Communism, for we know how much satisfaction these shenanigans gets by terming everything as communist. For analysis and understanding of Marxism had never been their forte.

So we see, that even the arc critic of cronism haven’t said, that there is anything inherently different in the two, but there is some opposition.

What is the reason for this beast to arise?

Cronyism even by the capitalist critic, arises because of “greed” of some capitalists to expand and survive at the expense of others, which leads them to enter into a government/private “partnerships.”

Writing a century ago, Lenin in a masterly way refuted this false notion of capitalism in its free form. In his treatise, Imperialism, the Highest Stage of Capitalism, he wrote;

Half a century ago, when Marx was writing Capital, free competition appeared to the overwhelming majority of economists to be a “natural law”. Official science tried, by a conspiracy of silence, to kill the works of Marx, who by a theoretical and historical analysis of capitalism had proved that free competition gives rise to the concentration of production, which, in turn, at a certain stage of development, leads to monopoly. Today, monopoly has become a fact. Economists are writing mountains of books in which they describe the diverse manifestations of monopoly, and continue to declare in chorus that “Marxism is refuted”. But facts are stubborn things, as the English proverb says, and they have to be reckoned with, whether we like it or not. The facts show that differences between capitalist countries, e.g., in the matter of protection or free trade, only give rise to insignificant variations in the form of monopolies or in the moment of their appearance; and that the rise of monopolies, as the result of the concentration of production, is a general and fundamental law of the present stage of development of capitalism.

What is cronyism, but an attempt to create monopoly? And Lenin’s words serves as a guide to action, when he says: “…instead of being a transitory phenomenon, the cartels have become one of the foundations of economic life.”

So does there remain any doubt that cronyism is nothing but capitalism in itself and any attempt to rescue capitalism is as much a fantasy as was with the ancient Greeks when after every lightening they gazed at sky to gauge the anger of Poseidon.

The mantra of higher and humane capital is same like those chanted by the ancient Indian sages to the snake king to relieve them from snake bite.