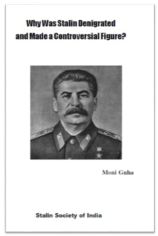 Stalin Society of India has published this booklet written by veteran Communist intellectual late comrade Moni Guha.
In this small but very important work, comrade Guha has analysed in detail the events that unfolded immediately after the death of Stalin. In fact MG raised question on the death and circumstances leading to the death. It has been well established now that Stalin, was very much aware of the deviations that had cropped in the party and Soviet government.

His attempts towards implementing the democratic reforms in the Soviet Union and particularly the Communist party was thwarted by the still hidden revisionist clique and the circumstances in which Soviet Union found itself due to the events of second world war and the task of defeating Fascism as well as securing the liberation of those parts that were ravished by the marauding forces of fascist reaction.

The price of the booklet is Rs. 30 (extra charge for courier)

We have few copies of it, contact us if you want to purchase