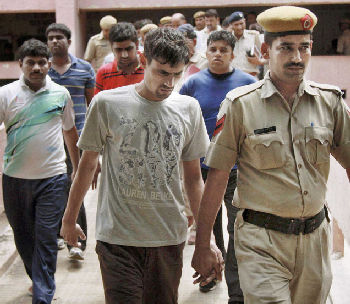 by Other Aspect Correspondent
The workers of Maruti Suzuki have decided to observer the 5 February as National Protest Day in different parts of the country. In an appeal issued by the Provisional Working Committee Maruti Suzuki Workers Union (MSWU) urged for a solidarity with the workers, who have been waging a valiant struggle against the management of Maruti Suzuki.

The statement stated “…We had three phases of strikes in 2011 demanding our right to unionize and finally got our union registered after a prolonged struggle. However, the management came down strongly on us on the pretext of the incident of 18th July 2012 when 546 regular workers and 1800 contract workers were terminated, 145 workers were put in jail and false charges pressed against 66 others who have since then been constantly hounded and harassed by the police. Legal cases related to both labour and criminal matters are going on in the Gurgaon labour and session court and in Chandigarh high court. The workers have been in jail for more than six months now and yet not one has been given bail till now.”

Since the outbreak of the workers-management conflict almost 2 years ago, the harassment of workers have continued unabated. The the entire 12-member executive of the MSWU and 145 other workers have been languishing in jail since July 2012, when the manager of Maruti was killed in a highly controversial fashion, but the management and the government had swiftly implicated the agitating workers of murder. Since then the police has been hounding them and putting them behind the bar, in a fashion only reserved for criminals. The jailed union leaders and their colleagues have been brutally tortured and forced to sign on white papers. The government and the police force with each passing day have shed all pretensions of neutrality and have come openly in support of capitalist.

When on 27th January, some of the workers had gone to meet the Chief Minister, Bhupinder Singh Hooda, he not only declined to meet them but also ordered the police to stop these people from coming near his house.

On one hand the workers are languishing on the other the management has been replacing all the fired and jailed workers with new staff mostly on contract basis. According to MSWU committee member the workers   are put under pressure not to associate with union workers else they loose their job.

The government has not stopped its witch hunt against anyone it deems to think with the union, whom it had unilaterally pronounced as guilty in the murder of the manager, on January 24th 2013, the police picked up Imaan Khan when he was addressing a press conference. The police came and took him from the venue as if kidnapping him. Rajender Pathak, the workers lawyer  told the website WSWS “It is getting too much. Imaan Khan was neither named in the [police] First Information Report (FIR) nor among the 215 charge-sheeted by the police. He was arrested simply for his active involvement in organising defence campaigns for the victimised Maruti Suzuki workers. There may be more and more workers arrested based on company’s instruction. [MSI] Chief Operating Officer (Administration) S.Y. Siddiqui is acting like police chief, telling the police who should be arrested. He doesn’t believe in negotiations, but in crushing the workers.”

trade unions that any attempt to de-rail the neo-liberal project in the state would be crushed similarly. On the other it is sending feelers not only to Maruti but to the entire Bourgeoisie that here is the ‘promised land’ where they can come and exploit the perennial labour force with impunity without bothering for any labour-law or trade union.

This is the fact that the workers have to understand, their struggle will not advance till they break the fetters with the existing system. The illusion that this state will help, has to be shattered and the message has to go to the workers that this is a bourgeoisie state serving the interest of capitalists, in this regime they can only be exploited and jailed if they dare to raise.

Unfortunately the revisionist parties union like CITU, AITUC and UTUC along with the social democrats like HMS etc, have done nothing but sow seed of illusion by building a false hope that some solution can be found within the legal-reformist framework.

The MSWU statement says that they “….on that day itself,( on 5th February—this author) a memorandum also be sent addressed to Chief Minister of Haryana.”

If by sending memorandum would have solved the problem, then class-struggle would not have started at first place!

APPEAL FOR ALL INDIA PROGRAMME ON 5TH FEBRUARY

As you are well aware, we workers in Maruti Suzuki India Ltd., Manesar, Gurgaon are waging a struggle against the exploitation and injustice heaped on us by the company management, state administration and the government. Our only crime has been that we have dared to raise our voice for the demand of formation of Union and against the illegal practice of contract workers system.

Since 18th July 2012, after the unfortunate incident in the factory premises as part of a management-woven conspiracy, we workers have been continually facing the brunt of repression. The company-management has at once terminated the jobs of over 1500 contract workers along with 546 permanent workers. They have, with the help of the state administration, heaped fabricated cases ranging from arson to murder on 211 of our fellow workers, while 149 workers, including our entire Union leadership, continue to languish in Jail for the last 6 months. Keeping aside all legality, workers and our families have continuously faced brute police atrocities.

We have chosen the path of struggle against this repression and injustice. In the past 6 months, even when faced with various state administrative blockades and repression, our spirits are unfazed and our movement is raging on. One of the reasons that we are able to sustain this struggle is also the solidarity and support that we have continued to receive from various workers organisations-trade unions and pro-people forces. But to take the struggle forward, we require more support and solidarity from your side.

In this stage of the struggle, we have decided that on 5th February 2013, Tuesday, there be a all-India day of solidarity action, demonstrations in our support and on that day itself, a memorandum also be sent addressed to Chief Minister of Haryana. We not only hope but trust that we will get your full solidarity once again. Against the nexus of company-management and state power, the protest of our pro-justice and class unity shall reach the deaf ears of those in power.

3 thoughts on “The day of protest by Maruti workers”