A high school student recently confronted me: “I read in your book A People’s History of the United States about the massacres of Indians, the long history of racism, the persistence of poverty in the richest country in the world, the senseless wars. How can I keep from being thoroughly alienated and depressed?”

It’s a question I’ve heard many times before. Another question often put to me by students is: Don’t we need our national idols? You are taking down all our national heroes- the Founding Fathers, Andrew Jackson, Abraham Lincoln, Theodore Roosevelt, Woodrow Wilson, John F. Kennedy.

Granted, it is good to have historical figures we can admire and emulate. But why hold up as models the fifty-five rich white men who drafted the Constitution as a way of establishing a government that would protect the interests of their class-slaveholders, merchants, bondholders, land speculators?

Why not recall the humanitarianism of William Penn, an early colonist who made peace with the Delaware Indians instead of warring on them, as other colonial leaders were doing?

Why not John Woolman, who, in the years before the Revolution, refused to pay taxes to support the British wars, and who spoke out against slavery?

Why not Captain Daniel Shays, veteran of the Revolutionary War, who led a revolt of poor farmers in Western Massachusetts against the oppressive taxes levied by the rich who controlled the Massachusetts legislature?

Why go along with the hero-worship, so universal in our history textbooks, of Andrew Jackson, the slaveowner, the killer of Indians? Jackson was the architect of the Trail of Tears, which resulted in the deaths of 4,000 of 16,000 Cherokees who were kicked off their land in Georgia and sent into exile in Oklahoma.

Why not replace him as national icon with John Ross, a Cherokee chief who resisted the dispossession of his people, and whose wife died on the Trail of Tears? Or the Seminole leader Osceola, imprisoned and finally killed for leading a guerrilla campaign against the removal of the Indians?

And while we’re at it, should not the Lincoln Memorial be joined by a memorial to Frederick Douglass, who better represented the struggle against slavery? It was that crusade of black and white abolitionists, growing into a great national movement, that pushed a reluctant Lincoln into finally issuing a half-hearted Emancipation Proclamation, and persuaded Congress to pass the Thirteenth, Fourteenth, and Fifteenth amendments.

Take another Presidential hero, Theodore Roosevelt, who is always near the top of the tiresome lists of Our Greatest Presidents. There he is on Mount Rushmore, as a permanent reminder of our historical amnesia about his racism, his militarism, his love of war.

Why not replace him as hero-granted, removing him from Mount Rushmore will take some doing- with MarkTwain? Roosevelt, remember, had congratulated an American general who in 1906 ordered the massacre of 600 men, women, and children on a Philippine island. As vice president of the Anti-Imperialist League, Twain denounced this and continued to point out the cruelties committed in the Philippine war under the slogan “My country, right or wrong.”

As for Woodrow Wilson, another honored figure in the pantheon of American liberalism, shouldn’t we remind his admirers that he insisted on racial segregation in federal buildings, that he bombarded the Mexican coast, sent an occupation army into Haiti and the Dominican Republic, brought our country into the hell of World War I, and put anti-war protesters in prison?

Should we not bring forward as a national hero Emma Goldman, one of those Wilson sent to prison, or Helen Keller, who fearlessly spoke out against the war?

And enough worship of John F. Kennedy, a Cold Warrior who began the covert war in Indochina, went along with the planned invasion of Cuba, and was slow to act against racial segregation in the South.

Should we not replace the portraits of our Presidents, which too often take up all the space on our classroom walls, with the likenesses of grassroots heroes like Fannie Lou Hamer, the Mississippi sharecropper? Mrs. Hamer was evicted from her farm and tortured in prison after she joined the civil rights movement, but she became an eloquent voice for freedom. Or with Ella Baker, whose wise counsel and support guided the young black people in the Student Nonviolent Coordinating Committee, the militant edge of the civil rights movement in the Deep South?

In the year 1992, the quincentennial of the arrival of Columbus in this hemisphere, there were meetings all over the country to celebrate him, but also, for the first time, to challenge the customary exaltation of the Great Discoverer. I was at a symposium in New Jersey where I pointed to the terrible crimes against the indigenous people of Hispaniola committed by Columbus and his fellow Spaniards. Afterward, the other man on the platform, who was chairman of the New Jersey Columbus Day celebration, said to me: “You don’t understand- we Italian Americans need our heroes.” Yes, I understood the desire for heroes, I said, but why choose a murderer and kidnapper for such an honor? Why not choose Joe DiMaggio, or Toscanini, or Fiorello LaGuardia, or Sacco and Vanzetti? (The man was not persuaded.)

The same misguided values that have made slaveholders, Indian-killers, and militarists the heroes of our history books still operate today. We have heard Senator John McCain, Republican of Arizona, repeatedly referred to as a war hero. Yes, we must sympathize with McCain’s ordeal as a war prisoner in Vietnam, where he endured cruelties. But must we call someone a hero who participated in the invasion of a far-off country and dropped bombs on men, women, and children? 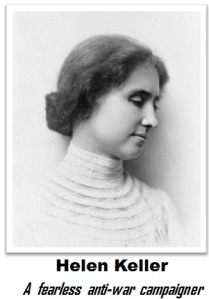 I came across only one voice in the mainstream press daring to dissent from the general admiration for McCain-that of the poet, novelist, and Boston Globe columnist James Carroll. Carroll contrasted the heroism of McCain, the warrior, to that of Philip Berrigan, who has gone to prison dozens of times for protesting the war in Vietnam and the dangerous nuclear arsenal maintained by our government. Carroll wrote: “Berrigan, in jail, is the truly free man, while McCain remains imprisoned in an unexamined sense of martial honor.”

Our country is full of heroic people who are not Presidents or military leaders or Wall Street wizards, but who are doing something to keep alive the spirit of resistance to injustice and war.

I think of Kathy Kelly and all those other people from Voices in the Wilderness who, in defiance of federal law, have traveled to Iraq more than a dozen times to bring food and medicine to people suffering under the U.S.-imposed sanctions.

I think also of the thousands of students on more than 100 college campuses across the country who are protesting their universities’ connection with sweatshop-produced apparel.

I think of the four McDonald sisters in Minneapolis, all nuns, who have gone to jail repeatedly for protesting against the Alliant Corporation’s production of land mines.

I think, too, of the thousands of people who have traveled to Fort Benning, Georgia, to demand the closing of the murderous School of the Americas.

I think of the West Coast Longshoremen who participated in an eight-hour work stoppage to protest the death sentence levied against Mumia Abu-Jamal.

And so many more.

We all know individuals-most of them unsung, unrecognized-who have, often in the most modest ways, spoken out or acted on their beliefs for a more egalitarian, more just, peace-loving society.

Source From the site thirdworldtraveler.com