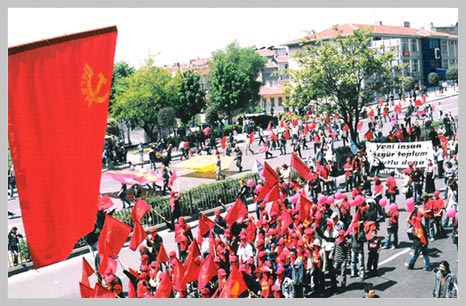 The Turkish bourgeois state represented by the AKP government has been choked by the heavy losses resulting from the extensive guerrilla operation of the HPG units on October 19. What they try to conceal under the oaths of revenge, racist provocations, lynching attempts and bringing the bourgeois media to line through the briefing of Prime Minister Erdogan is the reality that the denial and assimilation policy has suffered a heavy defeat once more in front of the Kurdish freedom movement.

Right after the general elections, the Turkish bourgeois state had put the total war plan called “new concept of war” into operation against the Kurdish freedom movement. Within the context of this wave of attacks, the Turkish colonialist fascism, the reactionary states of the region and the imperialist forces carried out important negotiations directly related to the Middle East politics, including the deployment of the NATO antimissile shield in Turkey. While the military operations, predominantly in the form of air attacks, continue in Southern and Northern Kurdistan uninterruptedly, they try to intimidate the Kurdish people through the attacks of extensive and massive arrest and imprisonments against its democratic organisations and cadres.

Within the same context, 7 fighters including Rustem Cudi, member of the Council of KCK , and Cicek Botan and Aliser Kocgiri, members of the Military Council of HPG, were killed in an air attack against the guerrilla zones of Xakurke and Xinere in Southern Kurdistan on October 10. This massacre, which was carried out under the technological support of imperialism and Zionism, and the on-going preparations of the Turkish colonialist army for a land operation were responded by the HPG with the Operation of Martyr Cicek on October 19. HPG announced that 81 soldiers were killed and tens of soldiers were injured in the operation against 18 different military targets in and around Cukurca.

Being one of the most extensive operations carried out so far by the Kurdish guerrilla forces, the Cukurca operation is a turning point for the latest military-political expedition of AKP. The “new war concept”, too, has failed in face of the resistance of the Kurdish people based on the guerrilla and the serhildan s. The discord in the ranks of the Turkish bourgeoisie about the possibility of solving the Kurdish question by military methods has deepened even further.

Among the Turkish workers and labourers, there is a developing tendency for peace and a reaction against the fact that their sons are being garbed in military uniforms and sent to die in attacks of occupation, of which they have no benefit. This tendency has not yet turned into the conscious of defending a just peace on the basis of the democratic solution of the Kurdish question; however, the demand of “stopping the blood shed” is growing. Although the Turkish bourgeois state tries to suffocate and disable this demand through media manipulation and lynching provocations, the demand for peace has inevitably taken its place in the agenda of the Turkish workers and labourers and this will undoubtedly turn into the conscious and action of democratic and just peace as a result of the struggle of the progressive and revolutionary forces.

We call upon all the progressive, revolutionary and the communist forces of the world to keep alive the memory of the immortal martyrs of the Kurdish freedom movement, to stand against the military operations of the colonialist fascism supported by the US and other imperialist forces and to defend the Kurdish people’s organisations which are exposed to political genocide through arrest and imprisonments.

We salute the operation of Cukurca by HPG, who, using their right to resist against the colonialist yoke, oppression and violence, carried out this action in memory of the martyrs of Xakurke-Xinere against the preparations of the colonialist fascist Turkish state for land operation.

We salute with great respect the martyrs of the Kurdish freedom movement in the name of our comrades-in-arm Rustem Cudi, Cicek Botan and Aliser Kocgiri, the dedicated guerrilla commanders, each of whom have many years of experience in war, and the 4 HPG fighters and the 7 immortal fighter who turned into martyrs in the operation of Cukurca. Their memories will live forever in the free, democratic and just peace of the Turkish and Kurdish people, in the victory of the Kurdish people’s freedom movement and in the victory of socialism in our region.

Rustem Cudi, Cicek Botan, Aliser Kocgiri and the martyrs of freedom of the Kurdish people are immortal!

Down with the colonialist fascist dictatorship! Peace, equality, brotherhood and freedom for the Kurdish nation!