This article appeared in EN Marcha, the central organ of Partido Comunista Marxista Leninista del Ecuador (Marxist–Leninist Communist Party of Ecuador. It analyses the  grabbing of rich fertile lands by the agro multi nationals and rich countries in Africa.

Another article dealing with the same aspect of imperialism referred to as Agri-colonialism was published in the Indian ML Journal Revolutionary Democracy titled Agricolonialism: Poor man’s land, Rich men’s harvest which can be accessed by clicking here. 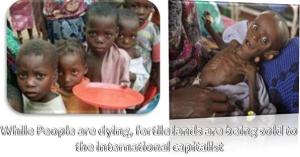 “This land is so fertile that there is nothing that can not be grown here, we do not need fertilizers or herbicides”, is the assertion of a happy businessman farmer. One would think that refers to the lands of the pampas of Argentina, the banks of the Parana Basin Guayas or Mississippi, but no, it is a statement that speaks of Ethiopian land; apparent contradiction, then, the world knows that the people of that African country dies of hunger.

Recent news tells of a drought that flared up in 2011. It was the biggest in 60 years, that brought famine to countries in the Horn of Africa, leaving the edge of death more than twelve million people.

The Horn of Africa is made up also Somalia, Eritrea, Djibouti and parts of Kenya. Covering a population of approximately one hundred million inhabitants, of whom over 14% are suffering from hunger, and for whom the UN has appealed to the world to donate 1.9 billion dollars, which never reached them.

Somalia is in the midst of an internal conflict that drives thousands of people fleeing violence and seeking food. They travel to Kenya or Ethiopia  these countries are themselves in deep crisis. The United Nations have done little. It sends requests for donations, send peacekeeping troops to try to sustain the imperialist positions in Somalia, delivered a few tons of food. Hillary Clinton, without blushing, said that if Africans do not understand then they can not expect the international aid to continue to arrive, as if she didn’t represent the country that has done more damage to the planet.

This image of the Horn of Africa is presented as an obvious justification for the famine that is almost a constant feature. But the impossibility of maintaining order, the government or the law is just or justification in a case where that situation has not prevented those in power to sell or lease the best land in their countries to transnational corporations, under the title ” appropriate to use underutilized land. “

The sale or rental of productive land to companies for their production is exported and sold at high prices in times like the present one, in which the FAO has reported that food prices have strong tendencies to rise, is in the facts, the reason for the famine in the Horn of Africa persists.

This is a neo-colonialist policies promoted by the UN through the FAO considers that fertile land should be properly exploited. With this argument the World Bank has opened the possibility that countries and large corporations to buy or lease large blocks  for major production areas.

“India, Saudi Arabia and China are the first purchasers of land in Africa. But Kuwait, Qatar, Bahrain and companies in Sweden, Germany and UK, “claims a reporter. Likewise, these negotiations are benefiting from large corporations such as Karuturi, an Indian company located among the 25 largest in the world in the field of agriculture land in Ethiopia qaue rented in rice farming then exported to their country. So does the company Star, of the Saudi billionaire Al Moudi, which invested 2 billion dollars. Beidahuang Group of Chinese capital has leased in Africa and other continents over two billion hectares of land.

So capitalism again shows its savagery, violence, recklessness, inhumanity, … Their representatives, leaders, entrepreneurs to cry out for peace, while performing these policies of appropriation of foreign bread-only show that this system leads to the annihilation of mankind. In times of crisis like the present, sustain the rate of profit is not repaired at no cost.

We have attempted to translate this article from Spanish using the Google Translation software. We are not responsible for any omission and commission, if any reader/comrade want to help in improving the text, then please contact us at marxistfront[@]yahoo.co.in.

The Original article is at http://www.pcmle.org/EM/article.php3?id_article=4769

Thanks to website — The Espresso Stalinist for putting this up on their site.