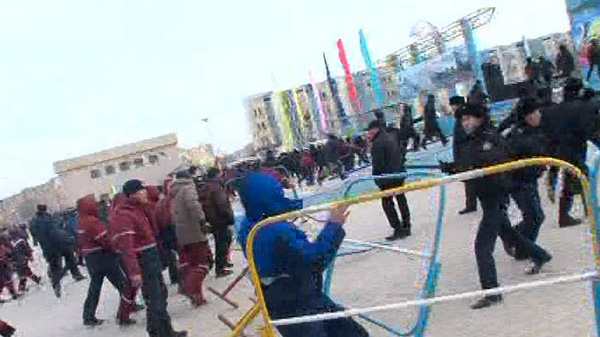 In the energy rich Central Asian country Kazakhstan, that has been ruled by the first and only president  Nursultan Nazarbayev as his personal fief, thousands of oilmen have taken to the streets in the town of Zhanaozen, South Kazakhstan.

Kazakhstan was marking the 20th anniversary of its independence on Friday, December 16. Celebrations were planned throughout the country, but the public in Zhanaozen, consisting mostly of young men, began to shout slogans and shortly afterwards trashed the scene, beat up the guards and started large-scale riots. According to official reports, protesters badly beat two policemen at this early stage of the event. (http://rt.com/politics/mass-oil-independence-zhanaozen-987/)

The rioters then went on to set on fire the city hall and the local office of the KBM oil company. Troops rushed to the city opened fire and dispersed the rioters. The Kplus TV said the violence broke out when a police car rammed into a group of oil workers who were peacefully protesting in Zhanaozen’s central square. Hundreds of KBM workers were fired in May after they had struck for months demanding higher pay. 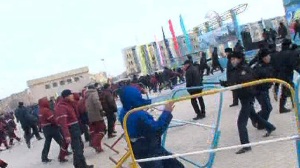 The situation in Zhanaozen is reported to be much more dramatic, according to the various reports in media and Russian blog sites, the police opened fire at protestors, killing 70 and wounding over 500 people. The authorities have deployed 1,500 marines to the town in bid to suppress the riot. Zhanaozen had one of the most serious ethnic clashes in late Soviet history. In 1989 (then called Novyi Uzen), the population comprised of equal parts of ethnic Kazakh and people from North Caucasus republics, primarily Chechens. Several ordinary conflicts at some point led to mass fights and then riots, and the authorities had to deploy army units and armored vehicles to the town to restore order. According to various reports, the 1989 events claimed up to 200 lives.

President Nursultan Nazarbayev has declared a 20-day state of emergency and a curfew in Zhanaozen.

On Saturday unrest spread to the town of Shetpe, where several hundred supporters of the striking oil workers blocked railway traffic and set a freight train on fire. Police said it some protesters also set a New Year tree on fire and smashed windows in town. Twelve people were wounded, one of them later died in hospital, when police opened fire on the rioters.

On Sunday protests spread to the regional capital Aktau, where hundreds gathered near the main square demanding that troops be pulled out of Zhanaozen. There were no reports of clashes with police in Aktau. (www.hindu.com)

According to Russia Today Website:  It’s not yet clear if the riot has connection with a seven-month long protest of oil workers Zhanaozen. Hundreds of laid-off workers had been demonstrating in the city demanding that their former employer Ozenmuinagaz paid them risk money. The action was supported by some of their former colleagues, including those working for another company, who wanted their salaries raised.

Some reports say that the violence started because the protesters were disgusted with the planned celebration in the central square, where their camp had been since May, and tried to oust people setting up equipment there. This is confirmed by some videos on the internet and the interior minister also accuses the oil workers of being the main provocateurs of the riot. However organizers of the protest deny any connection with the looting and pillaging that followed.”

2 thoughts on “Kazakhstan: Kazak Spring or Another Coloured ‘Revolt’ ?”