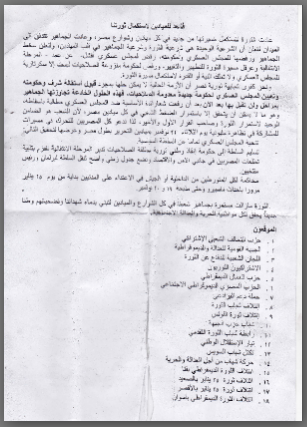 We, as revolutionary youth forces, insist that the current crisis cannot be solved by merely accepting the resignations of Sharaf and his government, nor can it be solved by the Military Council appointing a new government which will also lack power. These deceptive solutions have been far surpassed by the masses. Now that they have raised their main slogans against the Military Council and called for its ouster, these solutions are no longer acceptable to them. This cannot be achieved without continuing the popular pressure in all Egypt’s squares, because the people are the one guarantee for the continuation of the revolution. They are the first and last decision-makers. Thus, we call for all Egyptians to march and participate in the million-man mobilization on Wednesday, 22 November, in all Tahrir Squares across the length and breadth of Egypt, in order to achieve the following:

– Trying all involved in assaulting civilians, from the Ministry of the Interior or the Army beginning on the 25th of June, continuing with the events at Maspero and to the massacre of November 19th and 20th.

Where the masses are concerned, the revolution still continues. Our people are in every street and square to build—upon the blood of our martyrs and their sacrifices—a new country that will achieve freedom and social justice for every citizen.

2. The National Front for Justice and Democracy

3. The Popular Committees for the Defense of the Revolution

7. The Campaign to Support al-Baradei

8. The Youths of the Revolution Coalition

10. Youth of the Front Party

14. Youth Movement for Justice and Freedom