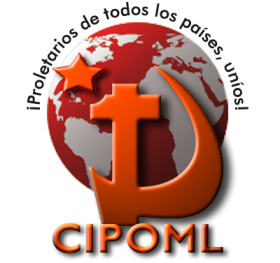 The brutal military aggression against Libya, carried out by the imperialist countries, France, England, U.S. and NATO and endorsed by the UN, after destroying the country, massacring tens of thousands of civilians and imposing a puppet government, has concluded its operations with the assassination of Colonel Gaddafi. We Marxist Leninists, the working-class, peoples and youth who are fighting for social liberation on all continents, reject and condemn this crime.

The aspirations for freedom and democracy of the working masses and the youth of Libya that were expressed in major demonstrations in February were manipulated by the imperialist countries, reaction and social democracy in order to take over the oil and other wealth. Under the banner of “democracy and freedom” they orchestrated a media offensive which allowed them to invade Libyan territory by air and land. They transformed the just demands of the popular sectors into a crusade to defeat their former ally. They have succeeded by force of arms and have imposed a traitorous and reactionary regime that will bring more hardship and suffering to the working masses and the people.

The last decades of the history of Libya have been marked by the rise of the Gaddafi government that initially raised the defense of natural resources and waved the banners of patriotism; later these positions gave way to the establishment of a despotic government that severed democratic freedoms and in recent years made a pact with the imperialist countries, especially those who today fought and overthrew it. These conditions must be confronted and resolved, in a sovereign way, by the Libyan people without tutelage or interference from anyone.

We always raise the principle of the self-determination of the peoples and we reaffirm it now. Libya’s destiny must be resolved by the workers and people themselves. Nothing justifies the imperialist aggression and the killing of thousands of human beings and of Colonel Gaddafi. We condemn these monstrous acts.

We call on the working class, on all workers and peoples, on the youth to continue the struggle for the self-determination of the peoples, for social and national liberation.